Hellertown Dental is proud to support our community and has helped sponsor the PBS Our Town Series on Hellertown in March 2017.

The PBS Our Town series partners with the people of various communities to capture the essence of their town – allowing them to become involved in the production in a very meaningful way.

The local residents serve as “storytellers”, using their own video recording devices (from phones to cameras) to capture footage for their story ideas. After that PBS edits the contributions into a final production.

Check out the final production on PBS39. 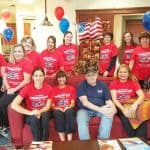