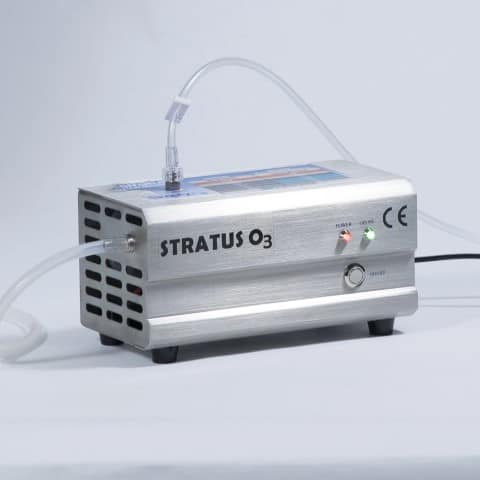 Hellertown Dental Group uses ozone for only one purpose: to create highly sterilized water for our patients.

Ozone has been used to disinfect water since the 19th century, when Werner Siemens, the German electrical engineer, first discovered a way to generate ozone gas using electricity. (Nicola Tesla later received a patent for similar technology.) Until recently, however, it’s been rather expensive to treat water this way, and the equipment was big and bulky. But the Stratus ozone generator from Simply O3 isn’t much bigger than a loaf of bread. The unit in use at Hellertown Dental Group fits easily in an office cabinet and generates enough “ozonated” water for all eight operatories (treatment rooms).

The EPA recognizes ozone as “a very strong oxidant and virucide.” But what does that mean?

How Does It Work?

What is Ozone Therapy?

In the back office at HDG, a tank of medical-grade oxygen is connected to the Stratus™ ozone generator. Oxygen in nature tends to exist as O2, meaning that each molecule is made up of two oxygen atoms. When O2 is hit with high voltage electricity, the two atoms split into single atoms. A single oxygen atom doesn’t like to be alone, so it seeks to recombine with other oxygen atoms. Most will recombine with another single oxygen atom, but a few will recombine with two other atoms, making O3, or ozone. The benefit is that ozone, when it collides with the cell walls of bacteria and other pathogens, breaks down the cell walls, quickly destroying the bacteria. (What is Ozone Therapy video). So when ozone gas bubbles its way through a vial of water, virtually all bacteria are killed and viruses are inactivated, or rendered incapable of reproducing. The result? Safe, sterilized water.

Simply O3 LLC is a family-owned and operated business based in Grand Ledge, Michigan. Owner and CEO Micah Lowe was inspired to start Simply O3 after his father returned from missionary work in Togo, West Africa. There, he saw the potential for ozone therapy to treat infection.

While some dentists use ozone as a type of complementary therapy, Hellertown Dental Group uses ozone for only one purpose: to create the most highly sterilized water possible for use in our treatments.

Call our Hellertown, PA dentist office today at 610-838-0131 for an appointment. You can also schedule an appointment using our online form.